It’s been 10 years since professionals and scientists last revisited the use and relevance of the term “cerebral palsy.” During that time knowledge about brain function and neuroplasticity has increased exponentially. For that reason, it’s now time for a change that reflects a more modern understanding of this condition and conditions associated with having a brain injury or disturbance in brain development. I propose a new context for better organizing the boundaries of cerebral palsy. I am introducing the term “Early Developmental Brain Injury (or interference in development),” or EDBI, as the initial diagnostic category and conceptual framework through which cerebral palsy, one of the many possible consequences of such an injury or disturbance in neurological development, should be understood. This type of change would immediately provide parents, clinicians, researchers and insurers a more appropriate perspective from which to think about, research, diagnose and treat what is now called cerebral palsy. The current emphasis on the motoric aspects of an EDBI is a historic artifact from the 1800’s when children were grouped together because their motor dysfunctions were the most obvious symptom of a then less understood neurologic disturbance. Adhering to that framework in the modern age limits the vantage point from which the initial injury is viewed and separates the condition from the mainstream brain research where it belongs.

Since the 1950’s experts in the field have repeatedly come together to revisit the term cerebral palsy and debate whether the definition and name should be revised or replaced. The latest international consensus meeting on defining cerebral palsy was held in 2004 in Bethesda, Maryland. During that meeting, “Reservations were expressed about the exclusive focus on motor deficit, given that persons with neurodevelopmental disabilities may present with impairments of a wide range of functions that may or may not include severe motor manifestations, thereby calling for the need for an individualized multidimensional approach to each affected personal’s functional status and needs.” At the conclusion of the meeting the answer to this conflict was to maintain the term CP and expand its definition and boundaries. While the new definition is broad and comprehensive, it’s stuck with a confusing name that refers only to a subcategory of a brain injury. Plus, since the pipeline of information from these meetings is not well organized, only an elite few professionals are privy to hearing about changes boundaries in a timely manner.

Despite the consensus statement from the 2004 meeting, the disagreement and confusion about diagnosing cerebral palsy continues, filtering down to families and the public. The limitations of the term cerebral palsy and the “wait and see” approach to diagnosing the condition delay the identification and tracking of symptoms beyond motor deficits. While doctors and families are waiting to see if a young child is a candidate for a diagnosis of CP, the child may face a delay in treatment. Instead, by actively providing an immediate diagnosis or description that brings recognizable neurological events under a unified title such as EDBI, there is a better chance of identifying the need for immediate clinical interventions and supportive services.

When the developmental pediatrician gave us Maya’s diagnosis of cerebral palsy he tried to make me feel more at ease by making light of the term, cerebral palsy, saying it was “just a catch-all term.” But aside from the emotional weight of receiving this diagnosis, I needed an intellectual and practical planning framework that would help me understand her condition and what I was seeing happen in her body. This label should have helped organize her access to medical interventions and support. Rather than providing clarity for me, I felt more confused about what my daughter’s symptoms meant.

I developed CP Daily Living in part to try and address the confusion our family felt after our daughter received the diagnosis of cerebral palsy. As I began conducting research for the website I discovered a lack of centralized, accurate, and consistent educational information about the condition. I found other confused parents, caregivers, an antiquated public understanding of cerebral palsy, and many clinicians unclear about its diagnosis, categorization, and treatment. As a parent and advocate, my intention is to improve the general education and clinical management of cerebral palsy by tweaking the framework upon which we have hung it. The epigenesis and multi-causal pathways associated with its development are not for me to address; this issue remains separate from this proposal.

It turned out that the more I searched for answers the more confused I became. The piece of information that could have helped me better support, process, and track what happened to my daughter was to understand first that CP is a sub-category of a Perinatal or Postnatal EDBI. Furthermore, despite her receiving a diagnosis of cerebral palsy, it was not clear to me that she may be at risk for other conditions associated with her initial injury. I thought the diagnosis of cerebral palsy meant that doctors were limiting the scope of her injury to motor development. I was wrong. If doctors and professionals had used a broader term such as EDBI, I would have better understood they were leaving room for assessing and determining whether other associated conditions may impact her development, daily life, and ability to learn. I have continued to be surprised by the variety and complexity of conditions we have uncovered in our own daughter. The obvious connection between her brain injury and the possibility of any part of her brain being affected was not so obvious through the cerebral palsy diagnosis. At the very least it would have been helpful for someone to help our family understand the scope of what we may be facing so we could arm ourselves with timely and appropriate resources. Much of what we have uncovered ourselves about our daughter relates to her initial brain injury, not cerebral palsy.

Another reason I wish to highlight cerebral palsy’s relationship to a brain injury is to align it with current interests and support for brain research such as the US’s national BRAIN Initiative. Formally and clearly highlighting the connection between cerebral palsy and the brain also places it next to the related and robustly supported traumatic brain injury (TBI) community already in the foreground of the public’s attention. Including the word “brain” in conjunction with cerebral palsy will further make the condition immediately relatable to the public and with this improved clarity we may better our chances for increased attention and support. The new and well identified association, will lead professionals and laypersons alike to think beyond old definitions and images of CP. This shift in terminology and thinking may have a positive and lasting impact on the treatment of people with CP, and the understanding of the diverse and potentially complex challenges children, adults, and their families face in coping with the effects of an Early Developmental Brain Injury.

Here is an example of my proposed diagnostic and clinical management framework:

Patient X has a Post Natal Early Developmental Brain Injury or PNEDBI due to a Grade III intraventricular hemmorhage.

Conditions associated with having an EDBI and not involving muscle control for Patient X:

The following is a graphic providing a visual illustration of the relationship between EDBI and SOME of its associated conditions including cerebral palsy: 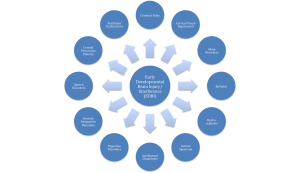 Ideas for implementing the new framework:

Once a commitment is made to openly identify or align cerebral palsy with the term “brain injury or interference in brain development”, there needs to be a reliable, known, and respected pipeline of information for community updates that physicians and professionals know they can access for current information about people with EDBI, cerebral palsy, and its related conditions. I believe since the AACPDM has acted as an authority on matters related to defining CP and is presently working on identifying standards of care, they would be a natural host for electronically disseminating this information. Let’s create a place on AACPDM’s newly unveiled website where professionals may access pertinent information about community updates, standards of care (or lack of them), and guidance documents for diagnosing and assessing not just where children fall in the GMFCS and GMFM scales, but also scales that identify and track commonly seen associated disorders for children identified as having an EDBI.

Once professionals can at least agree upon this larger more general framework and context for relating to cerebral palsy, the information channeled to families may become clearer and more consistent. Eventually, I would like to see a diagnosis pamphlet for parents whose children have had an EDBI. It would discuss not only CP but other potential complications and symptoms associated with having an EDBI. The goal would be to spur families into taking immediate action regardless of what formal secondary diagnoses professionals ultimately agreed upon. I believe the EDBI framework and having an initial diagnosis in hand, will help families understand and begin to proactively organize their thoughts, feelings, and approach to helping their child. This approach is based on modern ideas about neuroscience and neuroplasticity, and the increasing evidence for improving outcomes with the earliest possible interventions.

Update! A version of this post has been published in the February 2015 issue of the medical journal Developmental Medicine and Child Neurology.

Things to know about including Maya in your classroom-Creating a Teacher’s... The Complexity of Vision Problems in Children with Cerebral Palsy
Scroll to top