What is Cerebral Palsy?

You are here: Home1 / What is Cerebral Palsy?
Cerebral palsy (CP) is the most common cause of motor (movement) disability in children and includes a large adult population. The term cerebral palsy describes a group of movement disorders caused by an injury or disturbance in the early developing brain, specifically the sensorimotor areas involved with creating, coordinating and controlling movement and posture.

It is generally accepted that in cases where cerebral palsy is diagnosed, interference in early brain development has taken place, either in the fetal or infant brain, before the age of two years. Early brain injuries that cause CP differ from an acquired brain injury, such as a traumatic brain injury (TBI), that occurs later in life. Unlike in CP, in cases of acquired brain injury, movement and coordination patterns have already been established.

In 2015 Michele Shusterman, Co-Founder of the CP Research Network, wrote an opinion piece called Introducing the term ‘early developmental brain injury/interference, and a new framework for discussing cerebral palsy.[1] She was urging clinicians to think about the diagnosis of cerebral palsy differently. She wanted to illustrate the complexity and comprehensive care she felt was missing from the CP diagnosis; which at the time primarily was focused on the evaluation and treatment of problems with muscles, bones and movement. Since then, her ideas about re-framing cerebral palsy have gained traction. In 2019 an article appeared online in the Annals of Physical and Rehabilitation Medicine that listed her on a timeline documenting the evolution of the term cerebral palsy: 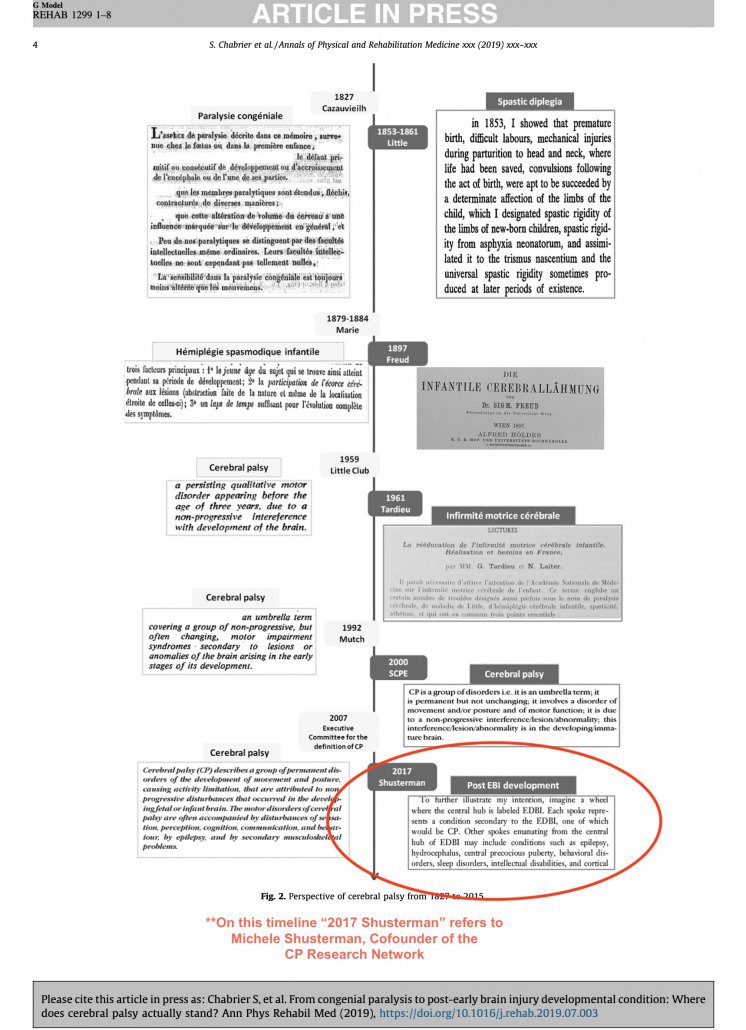 ..For many years the predominant focus in cerebral palsy research was on addressing motor impairments and related conditions. It is only in recent years that there has been recognition that cerebral palsy is a complex lifelong set of conditions…2”

Some conditions that have been linked to an increased risk for CP include:

Individuals who have CP are affected differently depending on where the change or injury in brain development occurred. 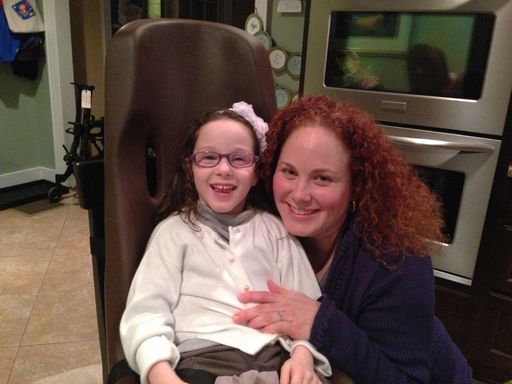 As an example, one person may struggle with moving their leg, arm and hand on one side of their body, but are able to  walk, whereas another person may have difficulty sitting up, maintaining balance, and using all four limbs. Since there are muscles throughout the entire body, it’s important to keep in mind that it is not just the obvious large muscles and muscle groups that may be affected. Tiny muscles, for example, those controlling and coordinating eye movements and eating, drinking and swallowing are examples of other muscles that may also be involved.

Other conditions such as epilepsy or speech delay, may also be diagnosed in individuals who have a CP diagnosis.

How cerebral palsy is treated will depend on what type or types of CP are diagnosed and what the goals of treatment include such as functional goals (ie walking versus addressing pain or both). Therapies to support and enhance the development of people with CP may include physical therapy, occupational therapy and/or speech therapy.

Your child may also need to use durable medical equipment (DME), like a wheelchair or a walker. Your medical team may also prescribe orthotics, or bracing, such as ankle-foot orthotics (AFO’s), to help support and encourage healthy muscle and bone growth. Medications or surgical options may also be used.

The number of people with cerebral palsy in the United States is approximately 1 in 345 people. Information about how many people have CP has been gathered by the Centers for Disease Control and Prevention (CDC) from four communities in the United States.

Here are the key findings from this report which is based on children who were 8 years old and living in these four communities in 2008 (updated information now available from 2010):

*Please note that the race/ethnic terminology used here is what is used on the CDC website and is used by the United States Census Bureau.

Cerebral palsy is caused by a brain injury or disturbance in sensorimotor brain development that impacts the individual’s movement, posture and coordination. It can be caused by a number of different events, conditions, or genetic changes.

Although the cause of CP does not get worse, the presentation and symptoms often change over time as there is ongoing wear and tear on the muscles and bones.

Doctors have a good understanding of the risk factors for CP but there is still much we have to learn about why some babies develop CP and others do not. There are many babies who share similar risk factors and injuries but develop differently.