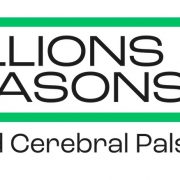 The Cerebral Palsy Research Network was invited alongside of the National Institutes of Health (NIH), the Patient Centered Outcomes Research Institute (PCORI), and C-Progress to teach early-stage investigators how to establish a successful research program at their institution during the annual meeting of the American Academy for Cerebral Palsy and Developmental Medicine (AACPDM). The nine-hour pre-conference tutorial featured presentations from each of these research and funding organizations to emphasize key steps for an investigator to get funding. The CP Research Network is differentiated from its co-presenters by being an organization that facilitates and conducts research.

In addition to presenting the network’s programs, registries, and tools, CEO Paul Gross held a breakout session for Q&A with interested attendees. “It was an honor to present our mission and vision alongside the largest public funders for research – NIH and PCORI,” said Gross. “The attendees also heard from Dr. Michael Kruer about his experience working with the CP Research Network to gain $3M in funding from NIH for his genetic causes of CP study.”

This pre-conference session fell on October 6 – World CP Day – when the CP Research Network Board of Directors has offered to match donations two-fold! Donate Now!World CP Day creates awareness about CP and much needed research around the globe. We are excited to be part of accelerating that research by educating new investigators to the field. 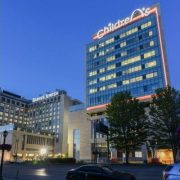 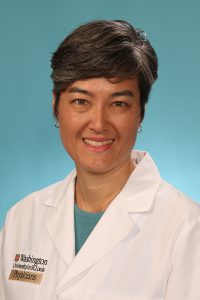 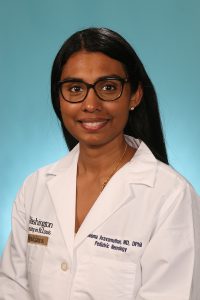 Bhooma Aravamuthan, MD, DPhil, is a pediatric movement disorders neurologist at St. Louis Children’s Hospital who specializes in the treatment and research of cerebral palsy.

The SLCH Cerebral Palsy (CP) Center is based in the Division of Pediatric and Developmental Neurology, and treats approximately 800 unique patients annually. The CP center cares for a diverse range of patients with childhood-onset conditions associated with motor impairment, including cerebral palsy as well as varied genetic, metabolic, and neurodegenerative conditions.

The CP Center works in collaboration with the Neurosurgery Center for Cerebral Palsy Spasticity (directed by Dr. T.S. Park), as well as colleagues in Orthopedic Surgery, the SLCH Pediatric Complex Care Clinic, and the Neonatal Neurology Clinic, to coordinate care for children with CP from infancy through adulthood. 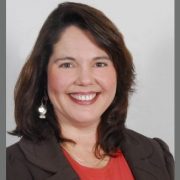 How does your lived experience align with the initial results from our chronic pain study? 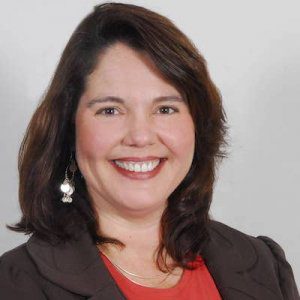 Compiling information about the chronic pain and wellbeing challenges many adults with cerebral palsy experience, sometimes on a daily basis, is an important priority for the Cerebral Palsy Research Network as we work to improve health outcomes for our community.

On Monday, July 19, at 8 pm ET, Mary Gannotti, PT, PhD, co-principal investigator of the CP Research Network’s adult study group, will present an update on our adult study of wellbeing and chronic pain.

Dr. Gannotti’s study seeks to gather cross-sectional data from 500 adults with CP to demonstrate health differences between adults with CP and the adult population overall. This interim report includes data from approximately the first 200 participants in the study.

“Members of the community will find it valuable to see how their personal lived experience aligns with many other adults with CP,” says Paul Gross, President, CEO and Co-Founder of the CP Research Network. “Dr. Gannotti will discuss how we plan to use these findings to support additional adult research and to advocate for policy changes in healthcare to improve health outcomes for adults with CP.”

Prior to Tuesday’s virtual event, MyCP webinar series registrants and MyCP members will receive a reminder with a link to the webinar. If you are not subscribed to the series, you can sign up for this individual webinar on our MyCP Webinar Series page.

The presentation will last for approximately 30 minutes and be followed by an open Q&A with Dr. Gannotti. All of our webinars are recorded and posted on our YouTube channel subsequent to the live webinar. You can also view Dr. Gannotti’s inaugural presentation after we initially launched the study in 2019.

Adults with CP can still participate in the study which is hosted in our Community Registry on MyCP. 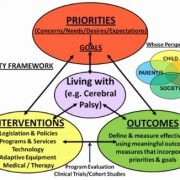 Hospitals and clinicians in the Cerebral Palsy Research Network will be able to track, learn from, and compare outcomes for their patient populations thanks to our selection of standardized patient outcome measures. The CP Research Network has collaborated with Dr. Unni Narayanan, the subject of our recent CP Stories series, at the Hospital for Sick Children in Toronto, Canada, to standardize a validated set of patient-reported outcome measures (PROMs) across the network. Working closely with Nationwide Children’s Hospital in Columbus Ohio and Dr. Narayanan’s PRIORITY-BASED SCALES FOR CHILDREN’S OUTCOMES – RESEARCH & EVALUATION (PSCORE) Program, the CP Research Network has released electronic versions of two PROMs to collate patient information across sites in our network.

The Gait Outcomes Assessment List (GOAL) and the Caregiver Priorities and Child Health Index of Life with Disabilities (CPCHILD) will ensure CP families can provide information and communicate their needs to clinicians in patient facing portals like Epic’s MyChart. On a wider scale this submitted data will also help improve treatment more widely in the CP community. Shared decision-making helps balance the input of doctors and experts with the priorities and preferences of patients and their families. 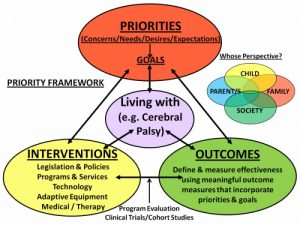 The patient priority framework from PSCORE shows an interrelationship among patient priorities, interventions and outcomes for living with cerebral palsy.

In addition to these benchmarking capabilities, the PROMs allow patients and patient families to identify important goals, which clinicians can take into account as they make decisions about treatments. And the standardization of PROMs holds the promise to improve medical and surgical outcomes across the network.

Dr. Narayanan has been funded by the Canadian Institute for Health Research (CIHR) to study the impact of these tools in improving shared decision making.

Patient families can use these tools today in MyCP – the CP Research Network’s personalized platform for cerebral palsy resources. The CPCHILD and GOAL Questionnaires are available in the MyCP Community Registry that can be taken annually to track a child’s progress across numerous domains like activities of daily living, mobility or participation. Once a family takes the survey, they can download a PDF of their results which includes their important goals, and bring these results to an appointment with their CP focused physician or therapy team.

The CP Research Network will enhance these tools over time to provide summary reports that will include the scores and list of important goals to better support shared decision making. Parents of children under the age of 18 can sign up for MyCP and take these surveys now.