Guest blog post: “Let’s get a service dog!”—or maybe not

A while back, after the death of our beloved dog Bear, we went dog free for a while to see what it was like.  It turns out we didn’t like living in a household without a big black furry friend underfoot. We could have just gone back to the humane society, but, since our 14-year-old son has quadriplegic cerebral palsy, we thought a skilled companion dog would be better.  That way, we’d have a dog back in our lives and our son would have a companion who could potentially do so much for him. It seemed to be an obvious choice.

With some research, I found a wonderful organization that specialized in training golden retrievers and labs (our favorites!) for an array of people with disabilities. Then I started the process with an initial application and hit send. Shortly, we were approved to apply for a skilled companion dog, 16 pages, requiring an essay about our son, references from our vet, explanations into how our previous pets passed and photos of our family. Each handler would need to fill out a separate application. Before my son was born, I had conducted home studies for individuals looking to adopt or foster children: their application was much less intense! If our application was approved and if we survived the phone interview and in-person interview, then would come the one week training visit and then the two week training visit before we might be matched with a dog.

The application was very clear. It asked: What did we think a skilled companion dog could do for our son? I realized that I really didn’t know. Maybe it could calm him down if he was having anxiety, maybe it could press the buttons to open door for him (our old dog Bear could do this), maybe it could serve as a buddy and a conversation starter so that others might not be afraid to approach my son in his wheelchair. But I also realized that I had never seen my son with a dog that he was comfortable with, except Bear.  When strangers approached him on the street and would say things like “my dog loves kids and dogs are so great for disabilities,” he would be horrified at the unpredictable, wiggly, slobbery animal trying to give him a kiss. When I asked him if he wanted a dog, he said “no”, but I would think to myself, “Well, he doesn’t know what it’s like to have a dog that is so well trained and just for him.” I had never seen him with a dog like this. So I decided to call the organization and schedule a tour.

At the training facility, the tour guide—a parent of a grown son with disabilities— warned us to be prepared for a lot of work.  As facilitator, you are responsible for all keeping the dog on task, ensuring his needs are met and that the rules of the agency are always followed. The dog is not to go anywhere without you and your son. Meanwhile, my son is clearly on edge because there are dogs barking in the background and he can hear them walking around nearby. At a demonstration with a current trainee, we were impressed with all of his skills. He’d pick things up off the floor and deliver them to his handler in a variety of ways, he’d pull open doors, walk perfectly next to the wheelchair, and rest his head on his handler’s lap with just a simple command. Then she asked if my son wanted to pet the do, and he emphatically said no. We gradually convinced my son to pet one very calm dog.  It was a very sweet moment, but it certainly didn’t appear to me that it suddenly turned my son into a dog person.  He is not.

That’s when I began to get it.  The applications coordinator said something that really stuck with me: “He has to be highly motivated by dogs for this all to work.” This seems very obvious but I had never thought about it like that. Those that are a good match for service or skilled companion dogs will certainly benefit, and the organization we visited is clearly doing an amazing job in training and ensuring that these pups are matched to their perfect person. I am so thankful that, before we went too far down the road, we learned that a service dog isn’t right for our son. I’m not giving up on bringing a new pup back into our family, but now I clearly know who that pup will be for.  It just won’t be for him. 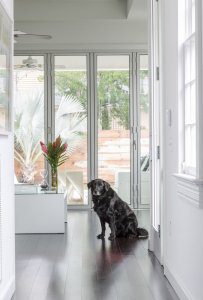