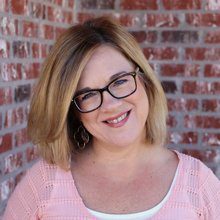 In the third installment of her inspiring story, CP and triplet mom Carol Shrader shares how she watched her son Benjamin, who has spastic quadriplegia, flourish during his college years…

The night before my son Benjamin began his freshman year, I could not sleep. I worried all night long.

“I know, right?” my husband Wade consoled, observing my nervous disposition. “I have been thinking about this day for 18 years!”

Benjamin, our triplet with spastic quadriplegia, lived at home with us and his younger sister Cate for the first three years of college, but getting around campus independently was still a big deal.

He was only a week and a half into the first semester when we hit our first snag. Benjamin was heading across campus in his wheelchair with a fellow student and following her lead. When she pointed at the curb where they needed to cross the street and asked him if he could make it, he assumed it was flat. Unfortunately, his depth-perception issues prevented him from knowing for sure. It wasn’t flat. He drove right off the curb.

His professor called me, and I rushed to the campus to find my shaken son, clearly in pain and surrounded by college kids, security, and the head of the theatre department. The footplates on his wheelchair were the only thing that prevented him from landing on his face. His feet still took the brunt of the 300-pound weight of him and his wheelchair.

I have never wanted to jerk back control of a situation more – and it was clear I needed to.

Quickly rearranging my schedule, I ensured I could be on campus the rest of the school year. I assisted between classes, shuttling Benjamin between the upper campus and the lower campus where theatre classes were held. I brought him lunch. I took care of his toileting needs. I brought him back to campus for late night events and drove him wherever he needed to go, ensuring he could fulfill his college kid schedule.

At the same time, I worked to find ways to help him achieve independence. I began by phoning the ADA compliance officer and asking for the sidewalks to be revamped on campus. They needed ramps so Benjamin could navigate them safely. When the ramps were consistently blocked by mail delivery vehicles, maintenance, and even professors, I called the dean.

With problems still arising, I called the university president and, in my sweetest Mama Bear voice, told him that Benjamin could not succeed at his college if he could not ever get into the classrooms. A few weeks later, every ramp on campus had been repainted with the words “DO NOT BLOCK” in bold letters.

Meanwhile, Benjamin worked with the ADA office to secure a scribe for tests. The professors assigned a student to copy their notes for him. I was his scribe at home for each assignment. We even burned the midnight oil together, working on a 24-hour theatre assignment to write a play overnight so his team could memorize lines and perform them the next day. Poor Benjamin had to dictate to a scribe who fell asleep between lines.

The triplet’s freshman year continued to be a long year of learning for all of us. Mason was doing well, living a relatively independent life on campus at his college. Claire, my triplet without cerebral palsy, had moved onto campus about half an hour from our home. Throughout her four years, she called, texted, and sent video messages. Sometimes she would share a funny story about life on campus; sometimes, she just needed her mom and emotional support.

When April arrived, I noticed a shift in Benjamin. During a course selection meeting with his advisor, he took an assertive new tone.

“I need to arrange my schedule so that I am at the upper campus for three days a week and the theatre campus for two days a week or vice versa,” he said. “I need for my mom to be able to leave me on campus.”

By the time Benjamin began his sophomore year, he had a personal care team trained to assist him. Having a personal care attendant meant he could be independent of me and could organize his study time, extra-curricular activities, and classes the way he wanted. By his senior year, Benjamin felt confident to move into a newly built dorm with accessible units. It was an enormous step.

Initially, Benjamin didn’t love staying in the dorm, but he grew to enjoy his independence. It was empowering for him to be in charge of his schedule, meals, and life. The accessible dorm and the ultimate willingness of the college administration gave him this opportunity. He had a great college experience participating in theatrical productions as both an actor and a dramaturg and was elected to homecoming court twice in four years. 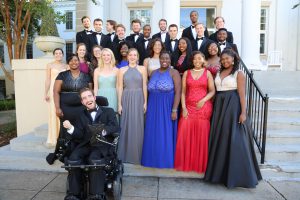 His brother Mason was recently accepted to his second Master’s program in Anthropology, focusing on Bio Archaeology at Texas Tech. Claire is currently in her second semester of Occupational Therapy School at Thomas Jefferson University in Philadelphia.

When I reflect on the triplets’ journey, I would like to call the educators who didn’t want to invest in their potential. I want them to know that those little preschoolers they thought would place an undue burden on their teachers graduated with honors – lots and lots of honors.

I would like to tell them that when Benjamin rolled across the stage with his diploma, the faculty were the first to stand in what turned into a standing ovation throughout the graduation hall. Those faculty did not stand because Benjamin had been a burden on their teaching. They stood because he worked hard in their classes, he engaged on a day-to-day basis, he encouraged his fellow students, and set the bar high for their performance. 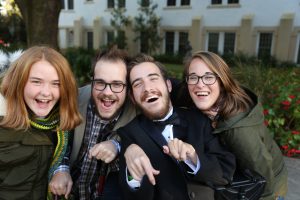 The Shrader children — triplets to the right with sister Cate on the left.

They also don’t get to brag about our soon-to-be Occupational Therapist Claire who is already changing the world for young people with CP and their families.

College looked different for each of my three. But they each found the school that matched their needs, the path that worked for their personal dreams, and made it not just a possibility but a reality.

What is a Learning Health Network – and why should you care?
Scroll to top