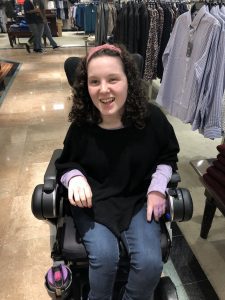 Last week at our neighborhood’s annual Halloween party, I thought about how much Lillian Maya has changed over the last ten years that we have lived here.

During our first five years in this neighborhood, we skipped trick-or-treating because it was too overwhelming for her. She did, however, always want to go to the neighborhood Halloween party. Though we always went, we usually ended up leaving early because something would happen that would upset her and that she could not move past. It was also very difficult for us to see her peers running around and playing together, while she sat in her wheelchair on the sidelines, only periodically and briefly able to interact with them. They would occasionally stop by and say hello when having a bite to eat, or when their parents would pull them over to say hi to her.

But now, it’s different. Now twelve years old, she is very confident and outspoken at these parties and she also enjoys trick-or-treating and visiting with our neighbors. She goes from person to person and engages each of them in thoughtful conversation. She has transformed into a confident young lady who has learned to more calmly express herself even to others who have unknowingly upset her.

This year, just as I leapt into HER conversation, thinking I was trying to help her, she taught me a lesson. I jumped in to ensure that our neighbor didn’t walk away from her, or dismiss her amazingness, because her slower response time didn’t allow her to answer a question right away. I said, “Lilly, Dr. Lebel just asked you a question. What are you thinking about?” And she said, “I’m thinking about the fact that I just saw my dad roll his eyes at me after I said I wanted to go trick-or-treating!”

Blake, her dad, didn’t think she noticed his eye roll because he is subtle with his facial expressions. Despite Lilly’s visual impairment and facial blindness, she can read emotions perfectly. Her dad was startled that she noticed. I was proud. I told her, “Get him Lil! Don’t let him get away with anything!” And she won’t, and she doesn’t-with any of us. And I realized again as I have so many times these last few months, that Lilly can handle herself. She won’t let anyone underestimate her. In that moment when she paused longer than most, and temporarily ignored the question being asked of her, she was slowing herself down and restraining herself from yelling at her dad in public. And I incorrectly assumed she got distracted by something inconsequential. Like many pre-teens she is often being reminded to watch her tone with her parents, something she has been working on. This was a very important pause!

It’s so easy, even for me, one of Maya’s biggest champions, to accidentally slip into the old habit of assuming she needs me to help her manage her social interactions. She can speak up for herself! If our neighbor had walked away, she would have rolled over to him and explained that she wasn’t ignoring him but needed an extra minute to process her feelings. It would have been fine had I not intervened. Thankfully she forgives me for these old yet well intended maternal habits. We are both learning to navigate social situations with more ease and humor. As she gains more confidence, I become increasingly humble, a dynamic that I think is a good sign that we are on the right path, her as an emerging young woman, and me as a mother learning to let go.

Learn about Research on Dystonia in CP