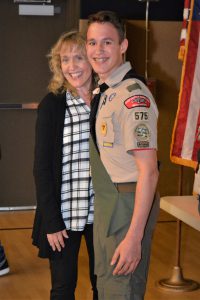 Alexander Diller, a young man with CP from his premature birth, hugs his mother Lisa, during a scouting event.

Like so many others with cerebral palsy (CP), Alexander was born premature, at 27.5 weeks. While on an oscillating ventilator, the endotracheal tube scraped the back of his throat, triggering a bilateral pulmonary hemorrhage. In turn, the hemorrhage caused intraventricular bleeding, which resulted in hydrocephalus. It would be nine weeks before Alexander was discharged.

During his nine-week stay at the hospital, Alexander’s parents—Lisa and Tim—began their advocacy, working alongside a neonatologist to ensure that Alexander had regular skin-to-skin contact. While this practice is common today, it was rare twenty years ago. Because pediatric neurologists often prefer to wait before making the diagnosis, Alexander would be three before he was formally diagnosed with CP. But as a physical therapist with advanced neurologic training, Lisa suspected it from early on: the month Alexander arrived home, Lisa said, he “began to show signs of lower extremity spasticity and other movement patterns characteristic of spastic diplegia.”

Growing up, Alexander has faced the kind of ableist pushback that young people with CP and their parents have come to expect. As Lisa and Tim prepared him for kindergarten, they settled upon a private school that they thought was best equipped to meet his needs. The school initially expressed reservations about their ability to accommodate Alexander, but after Lisa, Tim, and Alexander’s preschool teacher, Pat, assured the school that Alexander’s needs were as simple as finding a chair that allowed his feet to touch the floor, he was accepted. Later, in high school, Alexander would compete in impromptu and extemporaneous speaking, only to be docked points for his “walking style.” Some judges even went as far as commenting that he should “fix it.”

Alexander has taken these challenges in stride: he was talkative and outgoing from an early age. He has maintained an active, fulfilling extracurricular life in high school, consistently qualifying for impromptu and extemporaneous speaking tournaments[1] at both the state and national levels despite insensitive comments from judges. But the transition into high school did present its own challenges. “We had an influx of new freshmen that I met for the first time,” Alexander said. “I also had new teachers. A lot of it was explaining my CP or answering their questions.”

There were, too, the stares and the speculation from students Alexander didn’t know personally. They wondered whether his CP implied an intellectual disability, something that folks with physical disabilities often must contend with. “Sometimes there were assumptions that because I had CP I wouldn’t be capable academically,” Alexander said. Working with a psychologist who also has CP guided Alexander through the transition. Hearing from someone who had faced similar challenges helped Alexander develop strategies to better understand his own feelings.

Adults with CP have served as valuable mentors for Alexander. During his time with Boy Scouts—he recently attained the rank of Eagle Scout with a silver palm in 2021—Alexander met Steve, a Scoutmaster who also happened to have CP. Alexander has relished the physical challenges that scouting entails. During the same summer he met Steve, Alexander successfully completed a 50-mile hike over a 12-day period with his troop at Philmont Scout Ranch in Cimmaron, New Mexico. Later that summer, he then completed a 50-mile bike ride in seven hours on the Olympic Peninsula.

Scouting aside, Alexander is also an avid Aikido enthusiast and will be testing for his first-degree blackbelt in March. Lisa and Tim made it a point to foster Alexander’s interests from an early age. Some of this was pragmatic: This passion has helped Alexander physically, particularly with his strength, balance, and coordination skills. But it has also helped him develop a strong sense of independence. “Aikido has allowed Alexander to practice with his peers and teach younger students,” said Lisa.

The parents of children with CP inevitably become experts as the child ages, but Lisa’s background in physical therapy has also informed her approach to Alexander’s CP. “I feel my educational background, connections to my peers, and access to current research has enabled me to make educated and informed decisions about Alexander’s care and advocate for him when needed,” said Lisa. “It has also enabled me to teach Alexander from an early age how to advocate for himself.”

As Alexander transitions into adulthood, his independence will undoubtedly prove useful. He recently turned eighteen, starting to cross “the unsteady bridge from pediatric to adult care,” as Lisa called it, that both researchers and advocates alike realize is a critical time. As an educator and provider of adult neurological interventions herself, Lisa has made it a point to stay informed about current research so that she can help guide Alexander during the transition.

Now that Alexander is eighteen, he has started taking the CPRN registry surveys with the hope of contributing to the improvement of treatment interventions for individuals with CP. He graduates from high school in June 2022, and either D.C. or the Northeast seem like the most likely landing spots for college. He will study international relations and global health, ideally with an emphasis on East Asia (he has been learning Mandarin since he was six). “I’d like to involve myself in diplomacy and create policy that’s based on the needs of a community,” said Alexander. What he ends up doing, of course, will be up to him. But it’s abundantly clear that Alexander’s future is bright.

[1]An impromptu speech tournament requires participants to prepare a speech on an unplanned topic in just a few minutes.