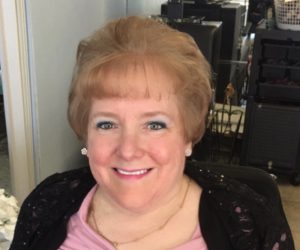 Susan Picerno, a woman in her middle age with spastic quadriplegia, has led a few different professional lives. She has thrived in all of them. But the beginning of her career entailed the hiccups that driven, ambitious people with cerebral palsy come to expect. After graduating summa cum laude with a bachelor’s degree in social work, she decided to continue onto graduate school, obtaining a master’s in social work from the prestigious University of Michigan. Despite a graduate degree from what was the best social work program in the country, Susan recalls interviewing for twenty-two different positions before receiving an offer. For one interview, Susan recalled walking in with her crutches and being met with incredulity: “The director was so flabbergasted that I was disabled that he just stared at me, speechless. He had two directors with him, and they had to conduct the interview. He didn’t say a word the entire time,” said Susan.
She finally landed a part-time role with United Cerebral Palsy in Buffalo, New York, volunteering at a nearby center for independent living at the same time. From her volunteering, she became a board member, then an employee, and eventually, Director of Services. This was in the late ‘80s, not long before the passage of the Americans with Disabilities Act of 1990. The independent living movement was still relatively new at the time, and so Susan felt like her and colleagues at other, nearby centers for independent living were part of a movement that was growing and changing in real-time.

After her time at the center for independent living, Susan transitioned back into social work management for a while, pivoting again into grant writing for a time. At age 41, she shifted again, this time moving to D.C. to dedicate herself exclusively to federal disability policy. Susan had been working on disability issues for most of her career, but tackling the problem head-on at the federal level felt both meaningful and fulfilling.

But as Susan continued to advance and take on new challenges in her professional life, she could feel her spastic quadriplegia getting the best of her. She started developing secondary health issues common for people with cerebral palsy: obesity, type II diabetes, and hypertension. “I tried to exercise but I found physical therapy to be unsupportive,” Susan said. “I was supposed to exercise at home on my own, without the ability to stretch my own muscles and no adaptive exercise equipment or support from other people with disabilities. Why do physical therapists think that this situation will result in success?”

This is to say that for people with cerebral palsy who want to develop an exercise routine, the barriers to entry can be quite high. Pair these logistical difficulties with her harrowing experiences as a child in physical therapy—she describes being worked so hard by her abusive physical therapist that her lungs collapsed multiple times—and it’s clear that developing a regimen can present not only physical difficulties, but emotional ones. “Looking back [at my time in PT], I wonder: couldn’t they have put me in elbow pads, kneepads, etc. so that I didn’t injure myself?”

Despite these early experiences, Susan realized she was at a crossroads. Knowing what needed to be done but not sure how to make it work, Susan turned to the Lakeshore Foundation’s MENTOR program, which she was introduced to through her participation in the CP Research Network. The MENTOR program, which the CP Research Network is responsible for promoting to the CP community, helps develop wellness activities that participants can practice at home. Susan had a rocky start to the program—it was hard not to be discouraged about exercise, given her past with it—but eventually, the program became less about past struggles and more about self-improvement. Likewise, the ability to connect with other CP Research Network members who’d faced similar challenges was immensely rewarding. “These folks will always be my friends,” said Susan. She has since gone on to participate in another activity organized by the MENTOR creators, called the M2M study, which was a free exercise program tailored to people with disabilities.

Exercise was once a source of anxiety and disappointment for Susan, but now it’s a central part of her life. She consistently works out through her local adaptive fitness program, DPI Adaptive Fitness, which offers both in-person and virtual programming. One of the joys of virtual programming is the ability to participate in workout sessions that are “based” anywhere: one of Susan’s favorites is through the Bay Area Outreach and Recreation Program (BORP), which is based in San Francisco. “I work out about six hours a week now, and that includes boxing class, weight training, cardio. All kinds of activities.”

Susan recently retired from nearly two decades of service for the federal government, almost all of which were spent working for the U.S. Department of Labor’s Office of Disability Employment Policy. But in more ways than one, she continues to work to advance the causes of people with cerebral palsy. Advances in the fields of genetics and neurology represent possible breakthroughs for disability communities, but if used unwisely, these same technologies could greatly reduce the diverse ways in which human brains function (also known as “neurodiversity”). Thanks in part to the connections she has made through the CP Research Network, Susan has continued to organize and educate about this topic, engaging with both activists and scientists alike: “As people with cerebral palsy, we need to step forward and speak decisively for our own community,” Susan said. “And we need to educate parents, medical professionals, and the general public about our disabilities.” Likewise, she also recently started Little Tiger Productions, a platform that seeks to amplify creative work by and about people with disabilities. “There are so few stories that are written with disabled people in mind. Characters that do have disabilities often exist to make a point,” she said. Tiger Talk, a Substack newsletter dedicated to just this topic, is set to publish soon.