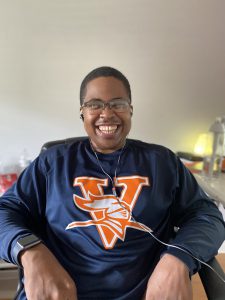 Marquise is always smiling ear to ear — here while listening to music in his dorm room.

It’s a daily decision to keep fighting and believing in yourself.
”

For Marquise Lane, succeeding at college wasn’t just a matter of working hard and pushing himself academically. Conquering his CP mobility hurdles and achieving independence were also vital.

When Marquise Lane graduated from UGA in 2016 with a BA in Management Information Systems (MIS) the moment was extra special to him.

As a young person with cerebral palsy, Marquise hadn’t just put in the hours of study needed to gain his degree, he’d also worked tirelessly to overcome the physical hurdles holding him back from his college dreams. 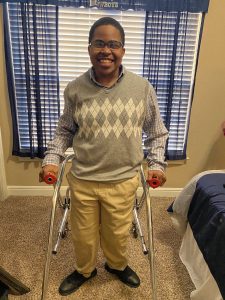 Marquise was determined to be independent from an early age so he made sure he got up early to have time to dress himself.

“I always wanted to go to college,” says Marquise, 27, who lives in Valdosta, GA. “But it wasn’t the mental things like the schoolwork that were in the way, it was more of the physical things like dressing and putting shoes on.”

Armed with a positive mental attitude, Marquise took on the challenge with gusto. Throughout his 12th grade, he got up extra early in order to practice mastering the independent skills he needed to succeed.

“I had to leave the house at 7 am so I’d get up at 5.30 am to give myself that extra time to dress and put my shoes on by myself – just to practice,” he recalls. “For a while I needed help but I got to the point where I was independent enough. Eventually, my mom agreed I was ready to go to college.”

Marquise was diagnosed with Spastic Diplegia cerebral palsy at the age of three and says he grew up fully understanding what having CP meant. 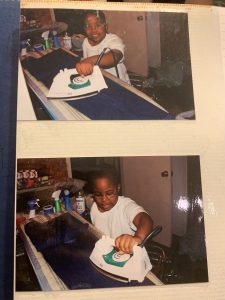 A young Marquise Lane takes up ironing his own slacks to help out around the house. 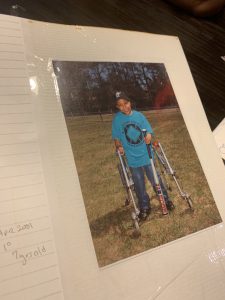 At seven years old, Marquise wanted to do all the activities his peers did including baseball!

“My mom’s always been big on talking to me like an adult so from three I knew what I had,” he says. “I don’t really like the word “different” because I do feel like I’m a normal person, I just have a different set of circumstances I have to deal with. As a younger kid I looked at other kids and saw them do things like swing on the monkey bars and then play football and sport. I wanted to do that too, but it was hard because I couldn’t. You have to fight that feeling of “I’m not good enough” or “I’m weird.” Every day you have to wake up and focus on the small victories and the positive things you’ve done. That provides momentum to keep going forward.”

At UGA, Marquise lived alone on campus in an accessible room and says he is grateful for the friends he made who would always lend a helping hand with things like Walmart and barbershop runs. His challenges on campus ranged from navigating the hills in Athens, GA, to working out how to get from A to B. From the start, the college paired him with a disability coordinator tasked with ensuring all his classes were accessible and that he had all the help and resources he needed.

“UGA went out of its way to make sure I could get to where I needed to be,” he says. “I had all the tools I needed to succeed academically and UGA provided a van service that took me from class to class and just about anywhere else on campus I needed to go. 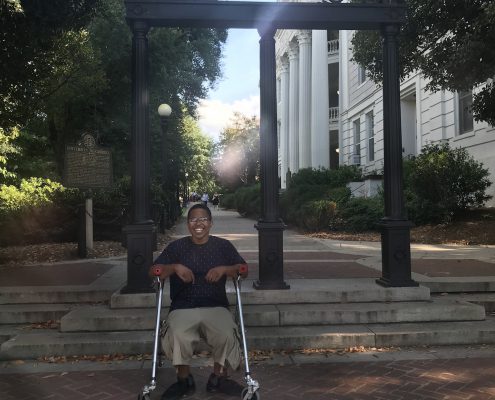 “There were several occasions where an entire 300-person class was moved because the original building wasn’t accessible for me and I had letters to share with professors so they were aware of any special assistance I needed.”

Regardless, it took stamina and endurance for Marquise to keep pushing toward his academic goals.

“It was tough at times,” he says. “When you look around you see that most people don’t have to work as hard as you do to accomplish basic tasks. They don’t have to worry about accessibility and how far away things are. I learned to focus on myself and limit comparisons.” 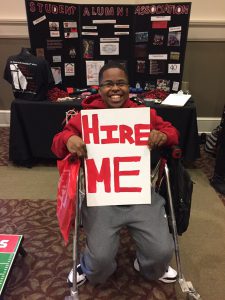 Marquise was not shy in pursuing work out of college.

He cites graduating from college as the culmination of belief in himself and hard work. “It showed me and my family that I could do anything I put my mind to,” he says.

Since graduating in May 2016, Marquise has worked as a client success specialist for ProcessPlan. His goal now is to continue living independently and advance his career.

“There isn’t some magical point where you have things figured out and that’s it,” he says. “Having a vision for the things you want to accomplish in life helps. Once you have a vision, you can break that down into actionable steps and go forward. It’s a daily decision to keep fighting and believing in yourself.”