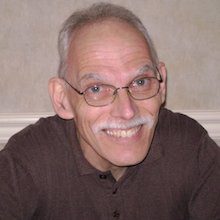 John Borland: I’m in my sixties and I was never told specifically what type of cerebral palsy I have, but I suspect that I have spastic diplegia that is more severe on the left side. When I was younger I didn’t rely on any equipment or mobility devices but now I regularly use a cane, and a walker for longer distances.

I was diagnosed with cerebral palsy at about age two and underwent fourteen surgeries between the ages of five and fourteen, as well as extensive therapy and use of braces. The surgeries primarily involved procedures to lengthen and reconstruct the bones in my feet and to correct some problems in my knees. In 2001 and 2007 I underwent additional surgeries for total replacement of my left and right hips respectively. I also have a condition that developed called Spondylolisthesis (spondy) that has resulted in in severe nerve pain on both sides of my back and sciatica down both legs. I decided to join the CPRN adult study panel because I have long waited for medical research to begin addressing cerebral palsy from the adult perspective; and so I would very much like, as I can, to help an effort such as this.

I received a BS degree in Biology and pursued post-graduate studies. I was employed by the Pennsylvania Department of Environmental Protection for over 33 years in various capacities.
I have travelled throughout most of the United States and parts of Canada. Hobbies have included: bird watching, nature study, camping, canoeing, backpacking and cross-country skiing. However, with the worsening of impacts from CP and with the onset of the spondy my activities have become largely restricted to reading, writing and local travel.

I was married in 1990 and have two children.