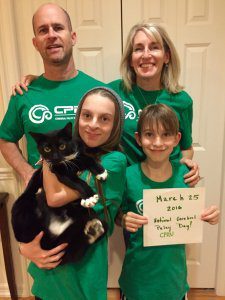 Each year, the patient advocacy organization Reaching for the Stars, persuades Congress to re-affirm March 25th as National Cerebral Palsy Awareness Day. At CPRN, cerebral palsy is personal and we want to call attention today, March 25, 2016 and share why we do what we do. Everyone on the founding team either has a child with CP, treats children with CP as a provider, or is deeply committed to research to improve outcomes for people with CP.

William is a blue belt

Our founder, Paul Gross, and our online editor, Lori Poliski, have an eleven-year-old boy named William who has bilateral spastic cerebral palsy (spastic diplegia). William was born prematurely at 30 weeks and went through the “preemie mill” with one insult after another to his 3 lb, 4 oz body. His early brain injury had a lasting effect in the form of the two neurological conditions: hydrocephalus and cerebral palsy. William is resilient with an infectious spirit and he demonstrated an incredible will to live then and now he is thriving. He inspires all who meet him. He loves to ride his recumbent bike, participate in non-adaptive karate, snowboard, read and build Legos. As his parents, it was trying to understand how best help him with his gross motor issues and his gait that led us to engage in cerebral palsy research and eventually found CPRN. 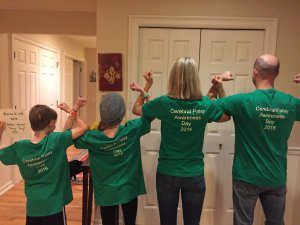 Given that today is National Cerebral Palsy Awareness Day, his mom Lori asked him what he would like people to know about cerebral palsy. William said, “Just because someone may have leg braces (orthotics), use a walker or be in a wheelchair doesn’t mean that they don’t have the ability to do whatever someone else may be able to do…they might just do it differently.”