You are here: Home1 / Blog2 / Children and Families3 / CP Stories: Tanya Sheckley and UP Academy

Everyone needs a place to belong. Inclusivity is life.”

Tanya Sheckley
Mom, Inclusive School Creator
Tanya Sheckley’s vision of creating an inclusive school empowering ALL children was almost shattered with the untimely death of her beloved daughter Eliza. Yet, the resilient mother channeled her grief into creating a school to embody everything Eliza taught her about ableism, education, and empathy.

Like many CP parents, Tanya Sheckley worked hard to research education options for her daughter Eliza, who was born with spastic quadriplegia cerebral palsy.

As her daughter’s kindergarten years approached, Tanya, who lives in Mountain View, California, was dismayed to learn that many schools provided the bare minimum when it came to educating children with disabilities. 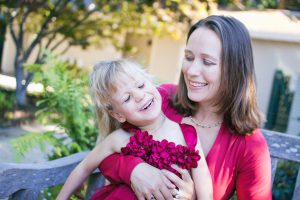 Tanya Sheckley with her daughter Eliza.

Eventually, Tanya found a parent participation school that was great for Eliza, who was unable to walk or talk due to her cerebral palsy. Her daughter’s new kindergarten teacher had experience in special education and Tanya was happy to see Eliza thrive.

“She learned to read, do math, and was curious about science,” recalls Tanya. “Kids didn’t see her as ‘different.’ She fit in, she was happy and became one of the most popular kids at school. She did well academically with accommodation for the way she learned. We had gotten lucky.”

By first grade, things were changing. Despite Eliza’s stellar kindergarten record, Tanya and her husband Chris were frustrated by the recommendation to put their bright and inquisitive daughter into a modified curriculum for children with different abilities. The one-size-fits-all model meant the work would be made easier, and Eliza would not be expected to learn the same material as her able-bodied classmates.

Under the Individuals With Disabilities Education Act (IDEA), public schools are required to provide access to education. Unfortunately, in a system built to educate the masses, children who are “different” often aren’t encouraged to excel in the same way as their peers.

“It felt like a barrier to providing real opportunity,” says Tanya. “Just because a student doesn’t have an effective and consistent method of expressing knowledge doesn’t mean the student doesn’t possess the knowledge. All students should be challenged in areas of strengths and supported in areas of weakness so they leave school with the knowledge and skills to be successful and independent in the world.”

Tanya, who had previously worked in business and taught as a yoga and ski instructor, became frustrated that no one school could support Eliza and her younger siblings Breda and Keller in their individual strengths. Why couldn’t there be an inclusive elementary school set up for all children to thrive?

In 2015, she decided to create an inclusive school for kids with disabilities and their able-bodied siblings. 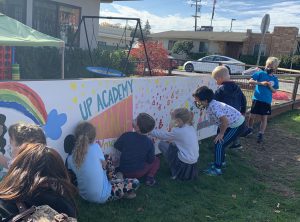 Students decorate the wall at UP Academy.

The determined mother sought funding, secured a lease, raised awareness, and reached out to her community to recruit and admit kids who would benefit from everything the school would have to offer. The new school, UP Academy, gained 501c3 status in December 2015.

Then the unthinkable happened. Eliza passed away in her sleep in March of 2016.

“It was completely unexpected,” says Tanya. “Eliza was fine and was having fun but one Friday she came home from school early because she was tired and not feeling well. I laid her down for a nap and told her I loved her. Our nanny was there to care for all three of our children so I went to the grocery store.

“When I checked on Eliza later she wasn’t breathing and her lips were blue. We did CPR until help arrived and Eliza was transported to the hospital where they did all they could. But there was nothing more the doctors could do. Walking out and leaving her behind was one of the hardest things I’ve done in my life.”

Despite her grief, Tanya could not give up on the school.

“I needed to find a way for the grief to serve me,” she says. “My family needed me to still be a mother and wife, and Eliza had taught me about ableism, education, and empathy. I had learned too much to walk away. I could lay in bed all day or use what I have learned to help others. There were still many families of children with disabilities who couldn’t find a fit for their children in the education system. To honor Eliza and to help them, I needed to work to create change.”

For the next two years, Tanya continued to build the school and welcomed her first group of students in 2018. There were plenty of challenges. The school’s first building lease fell through but Tanya persuaded a local church to let her use their rooms for a time. Eventually another location was found and the school has had a permanent home in San Mateo for the past three years.

With 20 students enrolled in UP Academy, Tanya is considering opening another location next year in the San Francisco Bay area. It is her vision to encourage other parents and educators to launch their own schools with a course she created, the Rebel Educator Accelerator.

“When we all work together, we can be more creative and achieve more,” she says. “Our vision for UP Academy is to build a method of education that can be shared and replicated. By teaching, training and sharing our curriculum with other schools we can serve more students in new and innovative ways.”

There is not a day that passes without Tanya thinking about her daughter who continues to inspire her.

“Eliza was sweet and kind,” she says. “She loved people and spending time with her friends. She was stubborn and wanted things to be done her way. She made decisions quickly and stood by them. We still have a dish we call Eliza Guacamole, which is smashed avocado and banana.

“It’s important to remember that despite any disability, all kids want to play, learn and make friends. Everyone needs a place to belong. Inclusivity is life, it is love, it is understanding and empathy, it is the thing that allows us to learn and work and play together.”

CPRN’s progress as a Learning Health Network is published!
Scroll to top