CP Stories: Josephine and Her Family Hit the Ground Running. They Haven’t Stopped Since.

You are here: Home1 / Blog2 / CP Stories3 / CP Stories: Josephine and Her Family Hit the Ground Running. They Haven’t S...

Eventually, Josephine would be released from the neonatal intensive care unit and sent home with her parents, Nina and Zach. But for the first seven weeks of her life, she fought to survive. Born postmature at 42 weeks, she experienced oxygen loss, resulting in Hypoxic Ischemic Encephalopathy (HIE), which commonly leads to cerebral palsy (CP). “Thinking back, sometimes I’m not sure how we survived the nonstop fussing, sleepless nights, and fear,” said Nina, Josephine’s mom.

From the moment Josephine got home, Nina and Zach hit the ground running. “We dove in hard and fast,” said Nina. They were fortunate to receive a formal diagnosis at eight months, which is relatively early for CP. The benefits of an early diagnosis are myriad, but it was most helpful in that it allowed Josephine to start an intensive therapy program and gain access to early intervention services. The doctors treating Josephine at the time did not mince words—the injury was likely permanent—but they did stress that intensive physical therapy could mitigate and even improve CP-related symptoms. Nina remembers one physical therapist, Gail Fennimore, as particularly helpful and encouraging: “Gail helped us learn about neuroplasticity and the ability to reestablish or improve movement patterns and muscle tone,” Nina explained. Now ten years old, Josephine’s therapy journey has been incredibly effective in improving both her day-to-day life and her future prospects. 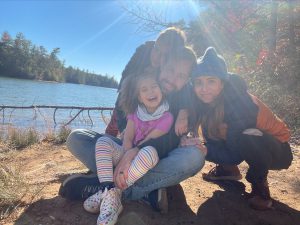 Camping and hiking are a big part of the Miller family life and Josephine is active participant.

Josephine was also fortunate that her grandfather, Nina’s father, is a scientist and engineer, and was able to quickly acclimate himself with cutting-edge CP research. Learning about the latest research aimed to improve outcomes for children and adults with CP became a passion for the family. “We scoured every piece of information we could find about studies and emerging discoveries with the hope of identifying promising treatments,” explained Nina. Because of the time and care that Josephine’s family put into familiarizing themselves with CP research, her quality of life improved dramatically. Nina started connecting with other parents who had the same proactive mindset, and eventually, she met Michele Shusterman, Director and Co-Founder of CP Research Network. At the time, Shusterman was running CP NOW, which Nina described as a vital resource hub for families trying to make sense of the deluge of CP research that has been published in the last decade or so. “Meeting Michele, I felt like I could breathe again. I felt empowered to fight for Josephine and to just be her mom. I felt a sense of community that bolstered all of us,” she said.

And so Nina’s initial connection to the CP Research Network was a natural one, based on a desire to make sense of new information, share it, and forge bonds with the larger CP community. For Nina, this initial connection would spark a series of more formal relationships with CP organizations. She would go on to work at the Cerebral Palsy Alliance Research Foundation (CPARF) for two years, supporting their medical research grant writing program, partnership development, and helping organize the annual STEPtember fundraising event. “My two years at CPARF were some of the most inspiring and exciting of my life,” Nina said. These two years ended on a beautifully appropriate note: right around the time that Nina’s time with CPARF was coming to a natural close, Josephine had the opportunity to speak at an international summit of CP researchers interested in accelerating innovation for mobility- and speech-based adaptive technologies. At just five years old, Josephine spoke (using her eye gaze communication device) in front of a crowd of more than eighty scientists and engineers about her experience in kindergarten, and how frustratingly slow her current communication technology was. The conference—of which Josephine was, to be sure, a major part—would accelerate the development of a brain-computer interface for real-time speech. 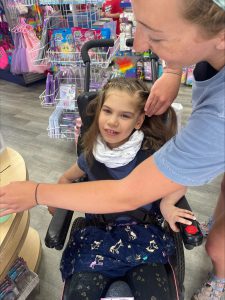 Josephine, in her wheelchair, out shopping with her parents.

Josephine has just started fifth grade; she finished fourth grade with all A’s and B’s. She learns in a traditional classroom environment, with the help of a special educator who works with Josephine to adjust the classroom materials into a format that works for her. Despite the ups and downs of her eye gaze technology in the classroom, Josephine loves school and is particularly fond of reading. But that’s far from her only interest; Nina and Zach have made it a point to keep Josephine involved in extracurriculars. She routinely swims, does therapeutic horseback riding, and has also played in her local Miracle Baseball League. This year, she added two new seasonal activities to the list: Alpine skiing and waterskiing. The Millers are also avid outdoor adventurers and will not let mobility challenges rob Josephine of the many benefits of being immersed in nature. Whatever it takes to hike, bike, ski, and ride, they will always get her there.

There are, of course, highs and lows, but Josephine and her family are constantly looking forward. Nina has kept in touch with CP Research Network since she first met Michele Shusterman, and has remained involved by taking on small content development projects for the organization. She recently started a demanding position at Microsoft but hopes to commit a few hours a week to CP Research Network by the end of 2022. 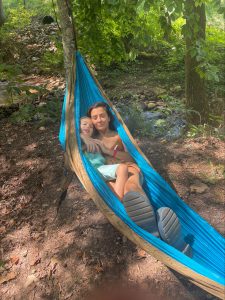 Summer and fall mean camping and other activities for Josephine and her family.

Now that we’re in fall, Josephine finds herself between the Alpine skiing and waterskiing seasons. Nevertheless, it remains one of her favorite times of the year: between an upcoming camping trip, her dad’s birthday, musical festivals, and her beloved brother’s soccer games,she has a full social calendar ahead. She’s also happy to be back in school again, surrounded by friends, classmates, and the larger community. Whatever the future brings, Josephine will be ready for it.
https://cprn.org/wp-content/uploads/2022/10/josephine-cp-story.jpg 400 928 Jeremy Klemin https://cprn.org/wp-content/uploads/2021/02/cprn-logo-new-300x187.png Jeremy Klemin2022-10-28 11:48:542022-10-28 11:48:54CP Stories: Josephine and Her Family Hit the Ground Running. They Haven’t Stopped Since.

The Top 10 Themes in Dystonia in CP Research