CP Stories: For Paralympian Duncan Wyeth, It All Began with a Red Schwinn

You are here: Home1 / Blog2 / Adults3 / CP Stories: For Paralympian Duncan Wyeth, It All Began with a Red Schw... 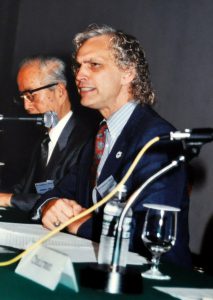 Duncan on the Paralympic Committee and as an executive at United Cerebral Palsy.

If you subscribe to the idea that the baby boomer generation officially started in 1946, then Duncan Wyeth was truly one of the first—he was born in March of that year, just thirteen months after his father had come home from World War II, wounded during the Battle of Anzio. At a hefty 10 pounds 6 ounces, Duncan was by no means a preemie, as is common for people with cerebral palsy (CP(. But the birth itself was complicated, and the labor lasted for thirty-six hours. “It’s not surprising that I experienced a lack of oxygen,” Duncan joked, as we spoke over Zoom.

And so when baby Duncan started falling behind on common developmental milestones, this, too, was unsurprising. A few months after Duncan’s first birthday, his parents, Barbara and Irving, took him to a clinic in Detroit, roughly 100 miles from where they were living in Lansing, Michigan, where Duncan’s father was attending Michigan State on the G.I. Bill.

In addition to a formal diagnosis of CP, Irving and Barbara also received a sobering prognosis: they were told that he would never walk, would have an intellectual disability, and would probably be dead by forty. The doctors, in short, told them to place Duncan in an institution and go have another baby. “In 1947, that was not a cruel, uneducated prognosis,” Duncan said. While Duncan’s parents quickly came to terms with the diagnosis, they were, to their credit, skeptical of the prognosis the doctors had offered. This skepticism was arguably the first of several major decisions Barbara and Irving made well. In the words of Duncan: “I’ve always said that the most important lesson in life is ‘choose your parents well,’ and I had the foresight to do that.”

Cerebral Palsy was still poorly understood at the time—United Cerebral Palsy wouldn’t be founded until a couple years later, in 1949—but as Duncan neared school age, his parents were proactive in getting him the physical therapy and the pre-K social skills he needed. They also, crucially, allowed Duncan to be a kid, to take risks. “My parents not only allowed me to go outside my comfort zone, they encouraged it,” he said.

In kindergarten, they made another major decision that would pay dividends: they bought him a bicycle. At first, the bike served a pragmatic function. “I would never have been able to keep up with my playmates, go to the local playground, etc. if I hadn’t been given that bike. It really provided me with the mobility to get around.” Duncan needed training wheels, but he was unconcerned. The bike was, in his words, the “great equalizer.”

In second grade, though, Duncan received an upgrade: a beautiful bright red Schwinn with a small, battery-operated horn. That summer, he made sure the bike was well-loved: “I rode that thing constantly, everywhere. Whether I needed to or not.” At the time, summer was something of a double-edged sword for children with CP. It meant freedom, yes, but most children received their physical therapy primarily through the public school system which, of course, was on break in the summer. If a child wasn’t receiving private physical therapy, then summer usually meant a step backward. Some of the progress made during the school year would inevitably be lost.

But when Duncan returned to school in the fall of third grade, his doctor was confused. “Duncan isn’t up on his toes as much when he’s walking,” the doctor said to Duncan’s mother. “You’ve found some way for him to have physical therapy in the summer, I’m guessing?”

“Well, no, I wonder what’s different,” said Barbara. “This spring he got a new bicycle, but that’s the only thing I can think of.”

Unlike most children with CP, Duncan’s condition had actually improved over the summer—he was notably less spastic, ostensibly because of all the exercise he had been getting on his bike. This Schwinn would mark the beginning of a lifelong love: “The cycling was physical therapy, but it wasn’t physical therapy that required a licensed therapist or insurance coverage. And I liked it. I was doing something.”

Duncan’s parents gave him the Schwinn for the same reason any parent would do so, but it’s hard to overestimate how radical the decision was at the time. Measured, supervised physical therapy was slowly becoming a part of any CP regimen, but common exercise—working up a sweat while riding a bike up the nearby hill, say—was thought to be harmful to the overall health of a person with CP. “Exercise was contraindicated, because the belief was the stress would exacerbate my spasticity,” Duncan explained. In this regard, Duncan’s parents were almost a half-century ahead of the research. 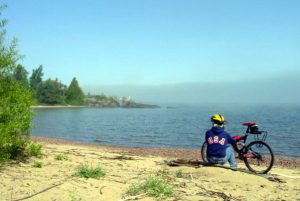 From second grade on, cycling has been a key part of Duncan’s life even at 76 years of age.

To say that cycling became a hobby for Duncan would be an understatement. He would continue to cycle in high school—roaming through the streets of Taipei, where he lived for two years while his dad taught at National Taiwan University—and then through his university years as well, first at Alma College and then at Michigan State, just like his father. In his twenties, Duncan joined a touring bike club, participating in weekly rides, including century rides. Not until his thirties did he begin to seriously compete in disability sports, receiving one gold medal and two silver medals in the National Cerebral Palsy games. A few years later, he would compete internationally—first at the international Cerebral Palsy Games, where he was the first American to receive a cycling medal. At the 1988 Paralympic Games in Seoul, he placed fifth out of more than forty competitors. This marked the beginning of his work with the Paralympics, which lasted several decades: in ‘92 in Barcelona he served as a cycling coach and member of the leadership team, and then at the Atlanta Paralympics in ’96 as the prestigious “chef de mission” for the U.S. Paralympics team.

During this time, he also served as the voting representative for athletes with disabilities on the United States Olympic Committee for two Olympic cycles of four years each. In ’97, he was elected to the International Paralympic Committee (IPC) and would later become the vice president. In 2000, the American Academy for Cerebral Palsy and Developmental Medicine established the Duncan Wyeth Award, which annually recognizes an individual who has made significant contributions to sport and recreation for persons with disabilities. While Duncan stopped competing around this time, he still cycles on a regular basis. “I am convinced that at age seventy-six, I am still as mobile and as active as I am in large part because of a physically active, sporting lifestyle.” 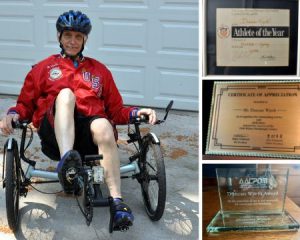 Duncan Wyeth has not only been the recipient of several awards and medals, he also has had an award named after him by the American Academy for Cerebral Palsy and Developmental Medicine.

Duncan is retired now, or as he likes to call it, “unemployed by choice.” But he has chosen to stay involved with the CP and disability community more broadly for many reasons. To understand one such reason, we need to briefly return to Duncan’s eighth-grade English class. His teacher, Mr. Porter, was a friendly, charismatic man who had become disabled after contracting polio as a child. “Mr. Porter was the first professional disabled adult I’d ever encountered, and therefore my first significant role model,” Duncan said. His teacher was proof that it was possible for a person with disabilities to have a fulfilling, ambitious professional life. For many young people with disabilities, they either never meet that adult role model or do so too late. Throughout his adult life, Duncan has taught and presented at schools with abled and disabled students alike in the hopes that he might serve as an example of what is possible. These exchanges need not be particularly complex: it is enough, in Duncan’s words, to enable a young disabled student to realize, “I can do that.”

He has also chosen to stay involved with organizations like United Cerebral Palsy (UCP) and the Cerebral Palsy Research Network (CPRN) to ensure that others have access to sorely needed resources and support systems. The types of resources that CPRN offers are largely in-step with the research, but Duncan particularly appreciates that they reflect what people with CP actually want. “One of the reasons I’ve been impressed by CPRN is their real desire to listen to the consumer voice and input so that programs and services are consumer-focused,” he said. To this end, Duncan also appreciates the close relationship between the community and its members: “There’s always research going on, all kinds of surveys that people with CP can participate in. They can contribute to a knowledge base that’s really going to move the needle.”

Duncan has done a fair amount of moving the needle himself, consistently pushing his limits and defying expectations. But he was resolute that his accomplishments wouldn’t have been possible without the support he’s received: empowering, passionate parents; the opportunity to pursue a college education; the chance to travel the world and represent his country; years of engagement in meaningful employment. “I am where I am today because of all the steppingstones I’ve had along the way,” he said. “The economic security, rich and varied learning opportunities, wise and caring mentors, and a personal commitment to progress. If I hadn’t acquired over the years the skillset needed to navigate an unfriendly system, there’s no way in hell I’d be who I am in 2022.”